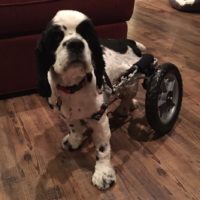 Hi! My Name Is Jerry

We're happy to tell you that Jerry has a new furever home.
Please visit our Available Dogs Page to see the pups currently available.

To know Jerry is to love him! Jerry "JerBear" Carseeya is a very affectionate and resilient heartworm survivor who defied the odds surviving a fibrocartilaginous embolism (FCE) during treatment to cure him of heartworm disease. Jerry is a happy, loving, and extremely handsome 6-year-old cocker spaniel. Although the stroke in his spinal cord caused him to lose the control of his back legs, it has not changed his playful and joyful spirit. Jerry has feeling in his legs and he is starting water therapy this week to see what improvements he can make in his strength and mobility. He has never allowed new challenges to discourage him for a minute.
Jerry has a cart made for him by Eddie's Wheels and he loves to go for walks and be outdoors! Indoors he is content to scoot independently and has a little waddle that allows him to get around his first-floor foster home very well. He is a Velcro dog and wants to be everywhere you are. Jerry weighs 20 pounds and requires lifting. He cannot manage a flight of stairs but is learning to use a ramp to negotiate a single step or small incline.
Jerry is very friendly with other dogs and although he was unsure of young children when first rescued, he has quickly learned to trust and has become comfortable with his foster family's three grandchildren, ages 1, 3, and 4. One fear that Jerry has not overcome is squeaker toys. He is terrified of them and will run out of the room and try to hide to escape them.
Jerry is crated during the day while his foster family is at work. He sleeps in a dog bed beside his foster parents bed. Jerry loves to have a bath and be cuddled in towels afterwards to dry off. He loves to be stroked and petted and he loves dog beds and has a bed "his base" in every room of the house. Jerry's bladder and bowel control is improving. He does require having his bladder expressed and while he now can push out a bowel movement intentionally, he still has "oops poops." Jerry is working on a new normal and establishing a potty habits routine.
When Jerry was rescued in November, he shared his Christmas wish list with us:
"I want to be wanted the way puppies are wanted. I want people to share my pictures and antics to the delight and anguish of their friends. I want my PetFinder write up to be viewed 1000 times a day. I want chew bones and squeak toys, soft beds and blankets. I want to be held like a baby and readily forgiven for any accidents. I know I am an adult but in all reality I am just a puppy. I never frolicked in the grass. I never had my paws wiped gently after a run in the mud and I never had a dog bowl with my name on it. I want my face on a coffee cup and my picture on a desk. I want to be someone's baby."
Jerry is still wishing for his forever home (although without squeaker toys). He would love to be somebody's baby with a family of his own to adore, pamper, and cherish him! Because he is now paralyzed, his care does require more of a commitment. Jerry is very sweet and gentle and appreciative and wants more than anything to please and be the best dog he can be. He craves love and attention and deserves to have a family of his own to spoil him and return the outpouring of his unconditional love. If you think you are up to the challenge of caring for a handicapable dog, apply to adopt Jerry at https://www.atailtotell.com/application-to-adopt.